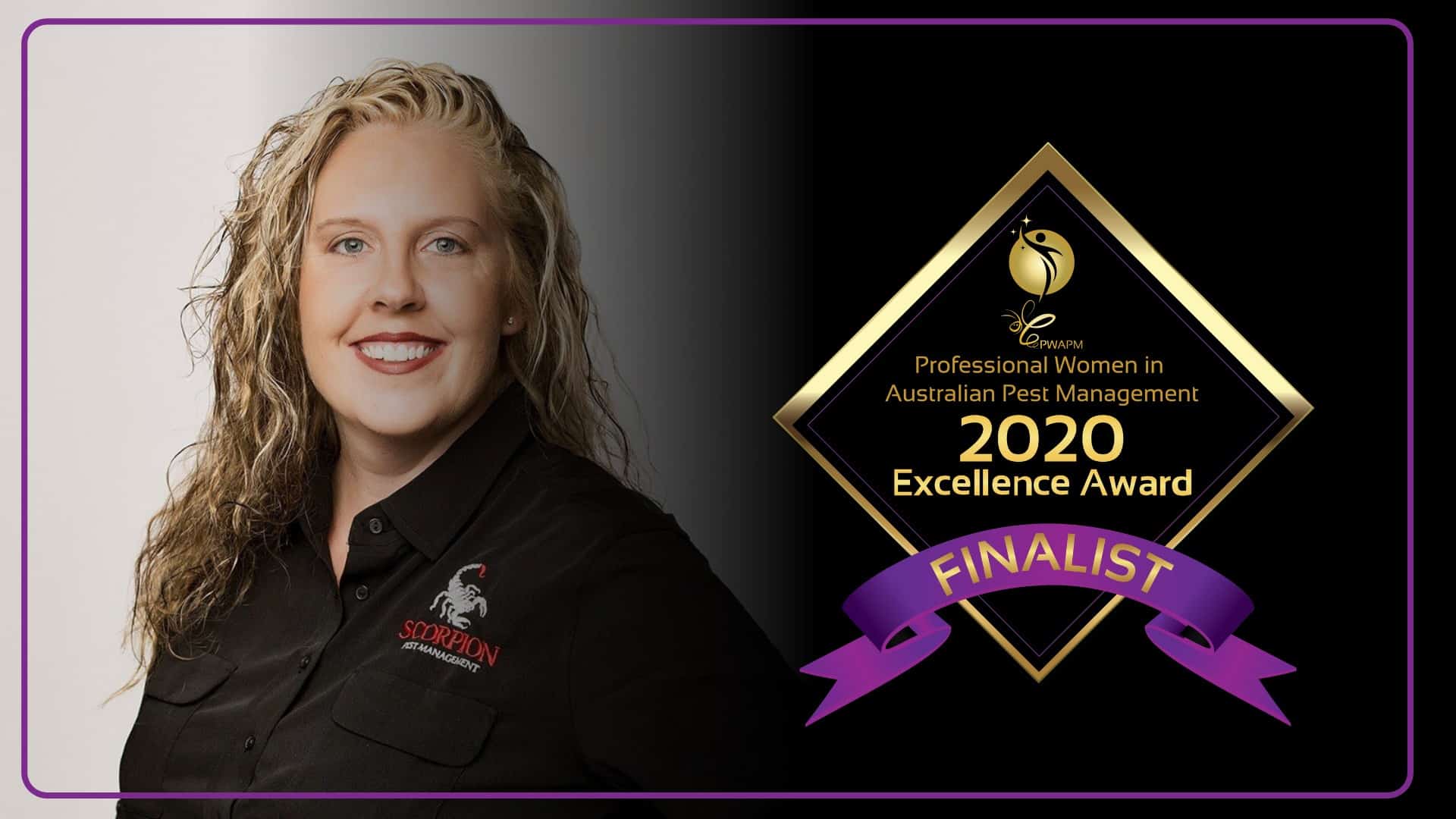 Scorpion’s own Business Manager is a proud finalist!

Pest control was once perceived as a non-traditional career choice for women in Australia and all over the world, however, here at Scorpion; we are working hard to change this marketplace perception.

On the 10th of September 2020, the Professional women in Australian Pest Management association (PWAPM) sponsored by BASF Pest Control AU announced the 6 admirable award finalists, hand picked from all over Australia. Our very own business manager, Tracey Eyles is proudly apart of those 6 finalists.
So, who are PWAPM? Well, it is no secret that pest control is long traditionally a male-dominated field, but pest-zapping is attracting more women thanks to associations like Professional Women in Pest Management. We are now recognising that women are just as capable as men in fulfilling the same positions.

In celebration of her finalist nomination, I have asked Tracey some questions regarding her reasons for joining PWAPM and how her own journey has landed her where she is today.

How did you end up as a Business Manager for a pest control company?

My role began on a casual basis answering phone calls and sending out invoices, to provide some assistance to my husband and owner of Scorpion Pest Management as that was not his forte! My working background was in sales beginning as a sales representative and eventually working my way up to becoming a Sales Manager. During this time, I was given more responsibilities and an interest in the business operations side of things grew on me.

That is when I decided to undertake a Diploma in Business Management and Human Resources while I continued to work in my sales role. Little did I know the benefits of completing these courses until later!

As Scorpion evolved, I found I began spending more time on a regular basis and the skills I had gained were starting to play out in the business with Scorpion Pest Mgt. At the same time in our life we were also dealing with a health crisis in our family which meant I had to give up my sales position to become a carer for our son.

Some years went by and Scorpion was growing, our son was getting older and becoming more independent so that gave me the opportunity to focus on the business and help my husband’s dream to become a proud and known business in the community that we could lead it into the future. Before I knew it, I was working every day, I had developed systems & policies and put them in place, staff were being recruited and our vision was on its way. It has been 12 years since Scorpion was created and my role as the Business Manager today is to supervise and lead Scorpion’s operations and employees. Perform a range of tasks to ensure company productivity and efficiency including implementing business strategies, evaluating company performances, and supervising employees.

What is the best part of working in pest control?

Not one day is ever the same!

You get to speak too such a diverse range of clients, help with their issues, learn some interesting facts about pests, challenging yet rewarding and the opportunity to be part of a unique team.

Why did you become a PWAPM member?

I became a member of PWAPM as they represent professional women in the industry.  The pest industry has always been predominately a male environment and as a woman I would like to change that!

PWAPM is an association that is giving women the chance to come together, to connect, share their stories, provide support and act as a voice for women in the industry.Women are powerful but when together they can be unstoppable!

Tracey wishes to personally congratulate the other 5 finalists on their nomination and especially, their dedication to the pest control industry. GOODLUCK!

Cassie Ryan
Above and Beyond Pest control - Geelong